Ambient electronic music with noisy textures and wacky noises and trumpet thrown in.

Oleophobic - live at Pixilerations from Arvid Tomayko-Peters on Vimeo.

by Arvid Tomayko-Peters with Steve Schwartz

Oleophobic is a live performance piece where colored oil and water blobs are manipulated on stage to create live visuals and music. The polar and non-polar liquids repel each other and create slowly morphing shapes that are tracked by a camera and used to control sound. The positions and sizes of the shapes control an additive synthesis algorithm, and their motions traverse stored sound samples. The blobs can also become the notes in a looping step sequencer that the performer can overly onto any rectangular area of the video. Stereo pan, sound volume and other parameters are also controlled by various attributes of the individual blobs such as size, location and elongation.

The same oleophobic and hydrophobic properties of molecules that keep this oil and water separate also form the basis for the structure of the cell membranes of living organisms, making this polar/non-polar interaction a primordial necessity for life. I was interested in how such basic chemistry could be used as a medium to create and control sound. It can be manipulated by the performer, but also has its own rules and unique interactions that the performer can work with or fight against. I wanted to see if I could harness the fascinating motions in this natural system to create an equally fascinating music performance.

At the same time this process harkens back to rock n' roll light shows of the 60s and 70s and early film special effects, mixing tactile chemistry with digital data collection and sonification.

The video you see was projected for the audience during the performance. It is a processed version of the same video feed used to track the oil and water blobs and create the sound.

Thanks to Bevin Kelley, James Moses and Brown Knoth for shooting the film and producing the concert.

August 12, 2010 at FP3 in the Fort Point area in Boston - this is a new performance paradigm for me. With Josh Marshall on flute on the last two tunes

Improvisation with The TOOB live at Handmade Music Brooklyn, March 8, 2010

An expansive TOOB improvisation including a love duet between the TOOB and the cell phone of an unwitting audience member and some melodic processed vocal passages. More photos and maybe even a video of the performance are on their way! 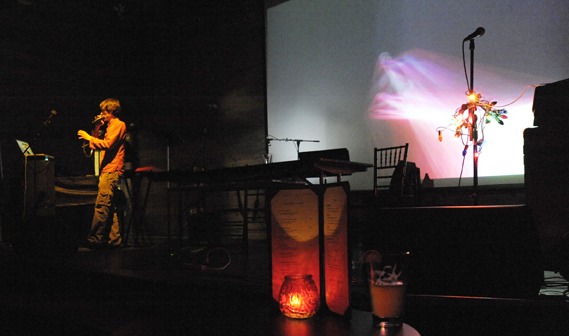